Fall is coming to an end... The geese and Sandhill Cranes are gathered at Creamer's Field for a stop before heading south.  The trees are nearly bare.  The woodshed is almost full.  The raised garden beds and greenhouse sit empty.  The frenzy of summer is coming to an end and our short fall too.

Fall is only about 3 weeks long, and every minute of it is planned to be ready for winter.  Even though we plan to spread woodcutting out over the summer, we don't,  and end up going every weekend until we have 6 cords.  There is the rush to get the garden and berries picked and preserved.  The furnace serviced, summers toys packed away or buried under the snow until spring, and the random projects... like the heater core my son's car needs.

As much as I adore the 24 hours of sunlight, flowers, gardening, and the absence of snow, the frenzied pace of summer is exhausting, and I love the slower pace of winter.   Shhhh don't tell anyone I said that.  Be sure you don't remind me of this post when I complain about -40 this winter.
Posted by Homemade Alaska at 8:10 PM 2 comments

Wow really my last post was in May?  That’s terrible.  I have a plan to get back on track.  Really this time I mean it!  Thank you for loyal followers sticking around, and for the new followers!

What have I been doing?  Well who knew that starting a business (um, yes, while working full time even though my husband is doing the bulk of the actual work) would take all my time?  Yeah, I know, any of you who have started a business probably could have told me that.  So wild rose cupcakes (and now cakes too) has continued all summer and now into the fall.  We have several orders scheduled for October getting us off to a good start as the Farmer’s Market season comes to an end. 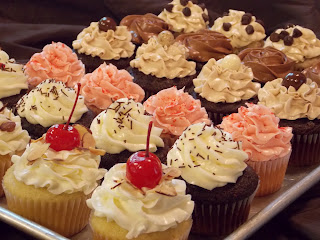 Here are some of our cupcakes 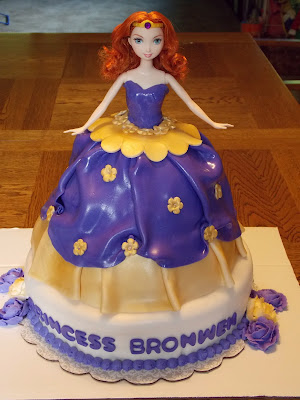 Here is my favorite cake I’ve made so far, a princess cake for a 4 year old, the doll was provided by the customer. 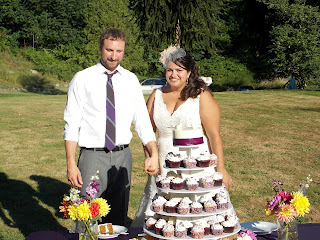 What else has been going on?  Well my sister got married and we had a lovely trip to Bellingham for the wedding, and to Oregon to visit family.  Yep we did the wedding cupcakes.

The garden went totally crazy while we were gone. I really didn't give it the attention I should have this year, maybe because I knew we were going to be out of town during the prime picking time. So chickweed took over, many things bolted, it was kinda ugly.  We are busy digging potatoes, carrots and still need to get the last of the cabbage, kale and swiss chard from the garden before a hard freeze takes everything. 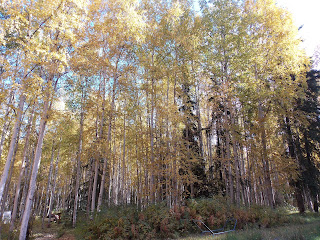 Yes we are in full fall mode now, the hard frost is just around the corner... 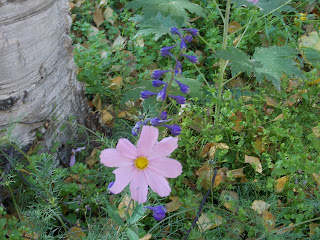 There have been hard frosts near us, but so far it hasn't hit us.  My homegrown, misguided Delphinium finally decided to bloom? 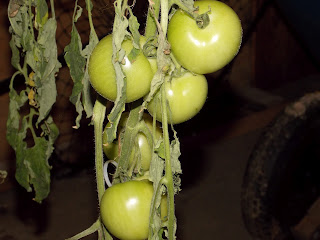 Finally my tomato update!  Yep we got tomatoes this year!  Ok so they aren't ripe, but there are definitely TOMATOES!  Ok, and so the ones I grew from seed died, and we bought these already started from Hawks Greenhouse, but whatever, we have tomatoes!!  We have taken the tomatoes from the green house and they are hanging in the garage to hopefully ripen.  How do you ripen your green tomatoes? 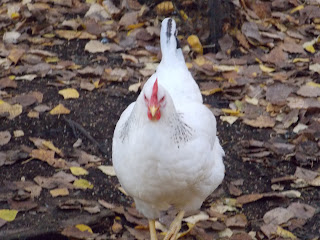 Our new layers (this is one of our two Delaware), we also have 3 new Ameraucana and they have started to lay cute little eggs.  We have yet to add a few of our older layers to the stew pot, but that will be coming before winter.

Email ThisBlogThis!Share to TwitterShare to FacebookShare to Pinterest
Labels: Alaska Life, In the Garden, The chicken or the egg

What's Going On Around Here

Ok, so I'm soooo far behind in my posting, that I'm going to do a picture post of what's going on.

Well that's a very quick update of the past 2 months!  This weekend our goal is to get the garden beds planted.
Posted by Homemade Alaska at 10:36 AM 3 comments

Email ThisBlogThis!Share to TwitterShare to FacebookShare to Pinterest
Labels: Alaska Life, In the Garden, Talking Turkey, The chicken or the egg

Cupcakes - It's where I've been

Wow I've been gone a long time.  I'm really sorry, I didn't intend to be gone for so long, but well I've been making cupcakes.  Let me explain...


We decided to start a cupcake bakery here in Fairbanks.


I got the idea after visiting one in Chicago, ok and I admit it, being addicted to watching Cupcake Wars.  Cupcakeries are all the rage everywhere.... except here.  I would love a store front, but for now we are going to sell at the Tanana Valley Farmer's Market on Saturdays and Wednesdays. 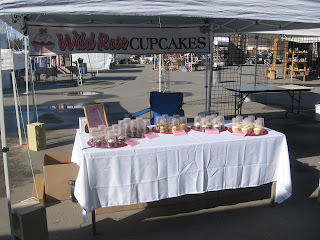 I hope you come visit our web page www.wildrosecupcakes.com  (I'd love some feedback on the site, I've never designed a web page before.  Does anyone out there have any idea how to get a button to link to Facebook and twitter on website tonight?  Here is a link to like us on Facebook
http://www.facebook.com/pages/Wild-Rose-Cupcakes/228236090623132

I have spent an enormous amount of time trying and perfecting recipes, the most difficult by far has been to make cupcakes that don't dry out immediately without using preservatives.  Here  is a link to my favorite vanilla cupcake recipe so far.
Mmmmm and my new favorite frosting French buttercream, you can find the recipe here


I hope you forgive me for my long absence.  I'll post more later on gardening and chickens and turkeys soon (ok realistically next weekend because this upcoming week will be a crazy one)

March is my favorite month here in Fairbanks.  Not only are we getting around 12 hours of light, and warming up nicely, it's also a fun month.  We have the Ice Art Championship, dog mushing, and are treated with wonderful northern lights.  This weekend we managed to have all three, reminding me just why I love it here.

The Open North American Championship is a 3 day sprint race that starts in downtown Fairbanks.  I tried to find how long the trail is, but for some reason I could not. I also forgot my camera and was not able to snap photos of the race, but did grab a couple videos.


A couple videos of the racers starting, sorry about the poor video
A dog pull, I'm not sure how much weight, but it was a sled of cement logs
It was a beautiful sunny day, and a fun way to spend the afternoon.  It used to be something my kids enjoyed with us, but being teenagers on spring break, they were barely climbing out of bed and didn't want to come.  However they were a little miffed that we stopped at the Fudge Pot and had drinks and snacks that they missed out on!
Here is a link to a news story that covered the race, it also has some nice pictures of a couple of the mushers http://newsminer.com/bookmark/17921822-Salcha-musher-in-position-for-first-Interior-Alaska-victory-in-ONAC-in-20-years
Posted by Homemade Alaska at 11:51 AM 1 comments

The web sitie is http://www.icealaska.com/
Posted by Homemade Alaska at 11:29 PM 1 comments

Even though there's at least a couple feet of packed snow on the ground, more being added on a regular basis, we're still hitting below 0, and even got as cold as -20 for a low last week,  it's still feeling like spring to me around here.  We have a lot more light, it's getting light around 7am and dark around 7 pm, we are above zero during the day (and actually have a temperature difference between the high and low), and IT'S TIME TO START SEEDS!  After a long, cold, white, winter, nothing makes me more happy that to put my hands in the dirt again and see green growing things, even if it's only indoors.

I recently trudged outdoors to retrieve my seed starting trays and packs from the greenhouse. It's always a chore because the greenhouse is in an area where the snow doesn't get packed, luckily my husband had a small trail packed on the way out there, but if I stepped off of it (which I did a couple times) it was over knee deep powdery snow.  He had also shoveled around the door for me so that it could be opened.


I started some flowers mid February, Delphinium, Columbine, Pansy, Petunia, and Echinacea.   Yesterday I planted several herbs, thyme, basil, dill, cilantro, sage, and oregano.  I also planted several varieties of tomato to go out into the greenhouse.  I started Siletz, Oregon Spring, Early Tanana, Nova, Manitoba, Sungold and Sweetie cherry tomatoes and a few varieties of heirloom slicing tomato seeds I saved from my CSA, I have no idea what the varieties are though.  I grow determinate tomato varieties and early varieties to hopefully get some tomatoes in our short, cool growing season.  I have so far been very unsuccessful with tomatoes, so I'll keep you posted.

I used a moistened organic seed starting mix, placed into packs of 9 saved from previous years, labeled and covered with plastic wrap. 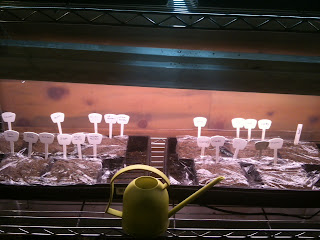 Then put them under regular florescent shop light placed 3-4 inches above the plants, lights on heating pads for 1-2 weeks until the starts have emerged, then uncover and remove the heating pad. 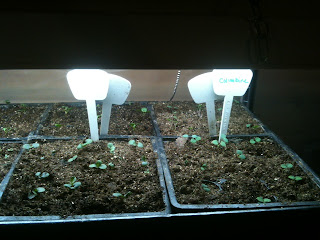 Email ThisBlogThis!Share to TwitterShare to FacebookShare to Pinterest
Labels: In the Garden
Older Posts Home
Subscribe to: Posts (Atom)

Homemade Alaska
I’m a wife, mother, working professional and wannabe homesteader on a few acres in Alaska. Homemade Alaska is about my journey back to basic living, where I share my recipes, gardening, raising chickens and rabbits, crafts and just about anything else I make at home.